"Enjoying fine old rifles - and good friends - one shot at a time."

This is the general discussion area for the forums at BPCR.net. Anyone who appreciates and enjoys the classic single shot rifles of the late 1800 period is welcome to take part here. Civility in all postings, and respect for your fellow shooters are the primary expectations of all members. Trolls will be removed from the membership without warning or recourse. The Forum owner has the final, and only, say in who is determined to be a troll. Please try to put your posts in the correct forum. (Example: loading tips and questions in the "Cartridge Loading..." forum.) Postings may be moved by the moderator to correct forums if he determines they can be better placed.
BUTTON_POST_REPLY
20 posts

When I was in single digits, I dreamed of hunting moose in Alaska. It has been a 1/2 century-long dream that finally became a reality. While I have hunted all over the USA, Canada, and Africa, I had never hunted Alaska until this month. It has always been at the top of my bucket list, since long before there were such things as bucket lists were fashionable. Yet, somehow never got around to it.

So, here are some photos of my first AK trip and my first moose. It was a spectacularly great time. 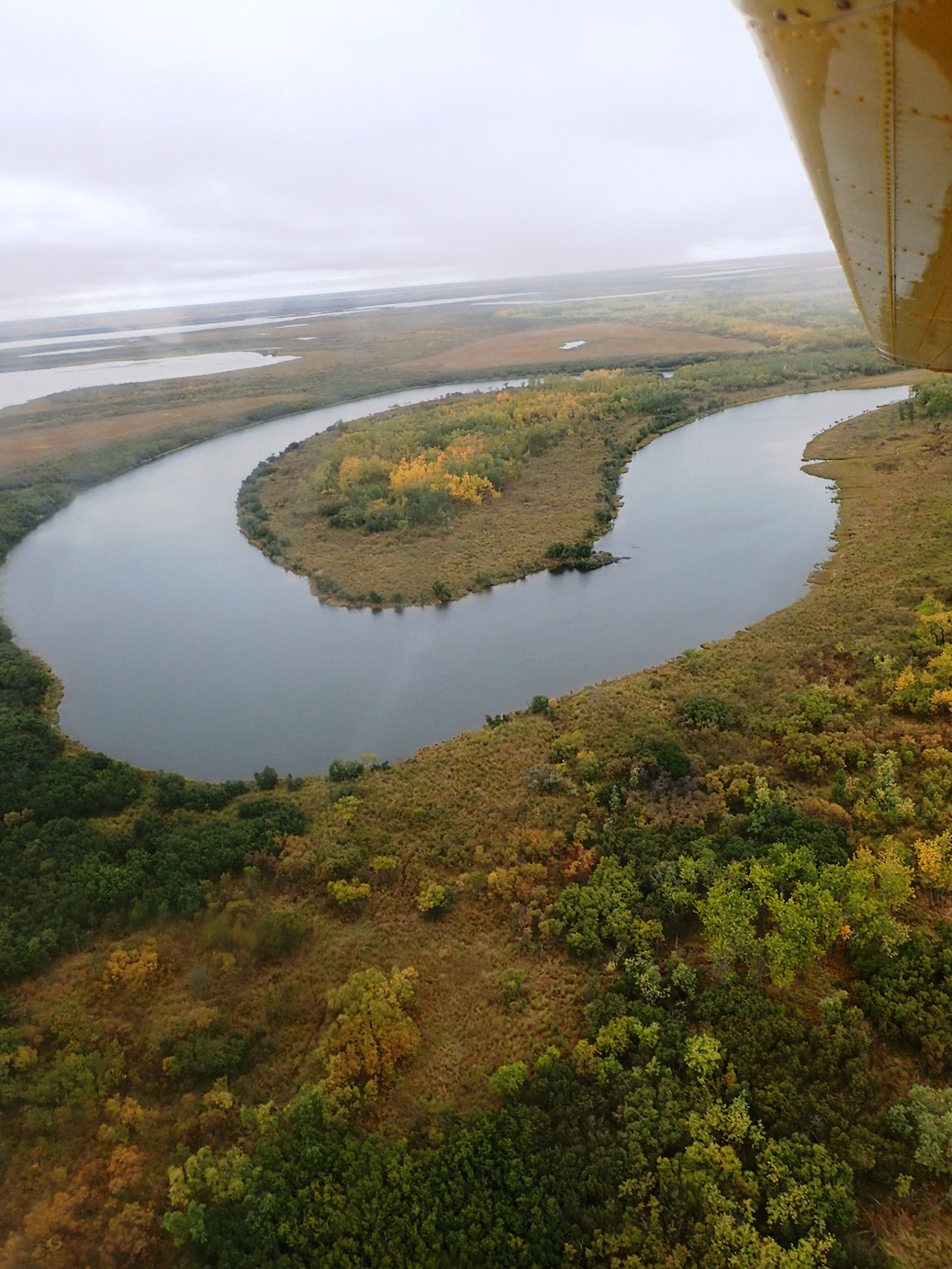 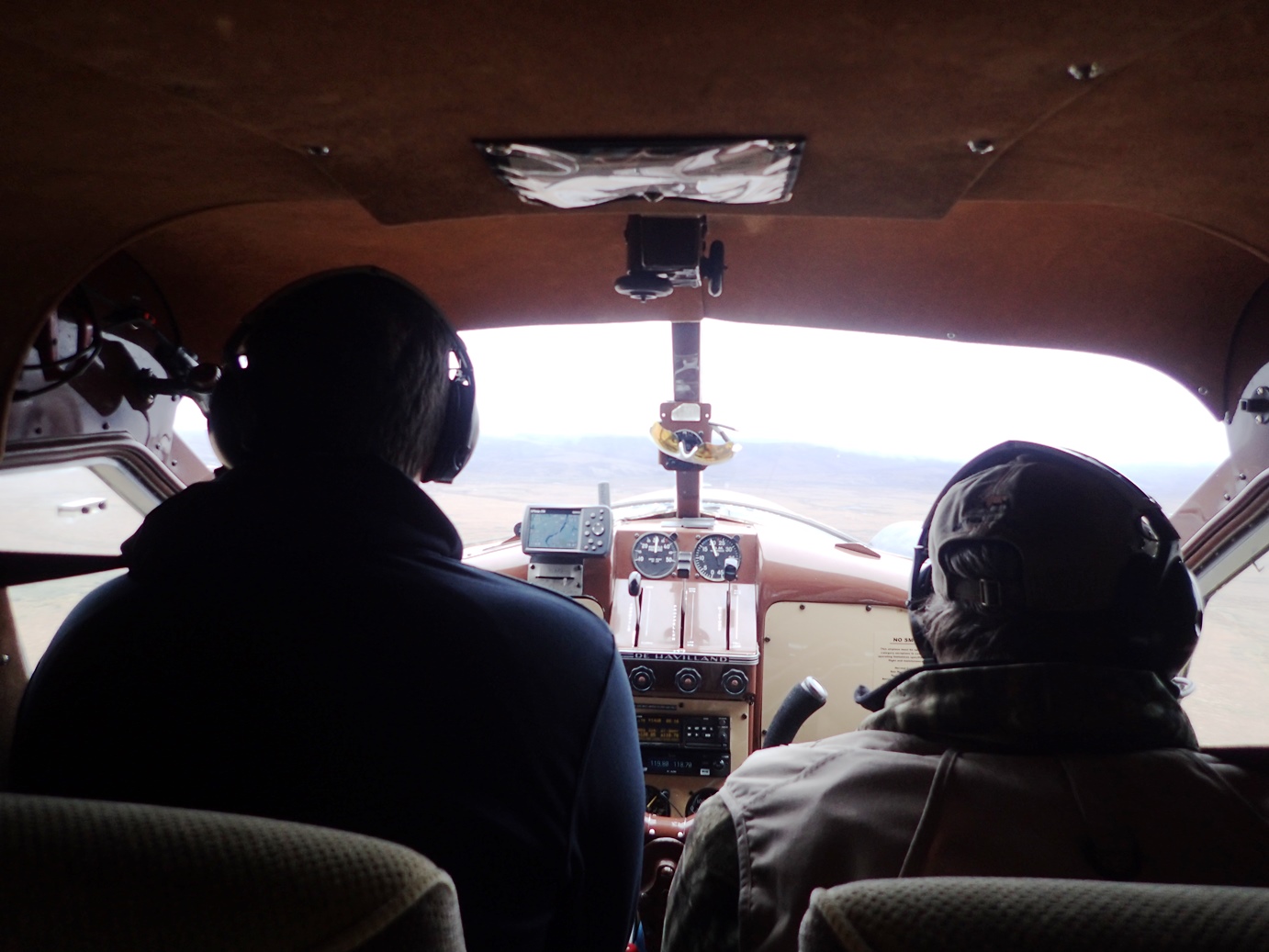 It only took until 4 pm on our first legal day to get our first moose on the ground. I had stalked to within 50 yds of this guy and spent 2 hrs watching and waiting for him to get up but when he did, I didn't have a clear shot. Luckily for us, Mark was returning to where we had split up and was in the right place at the right moment. 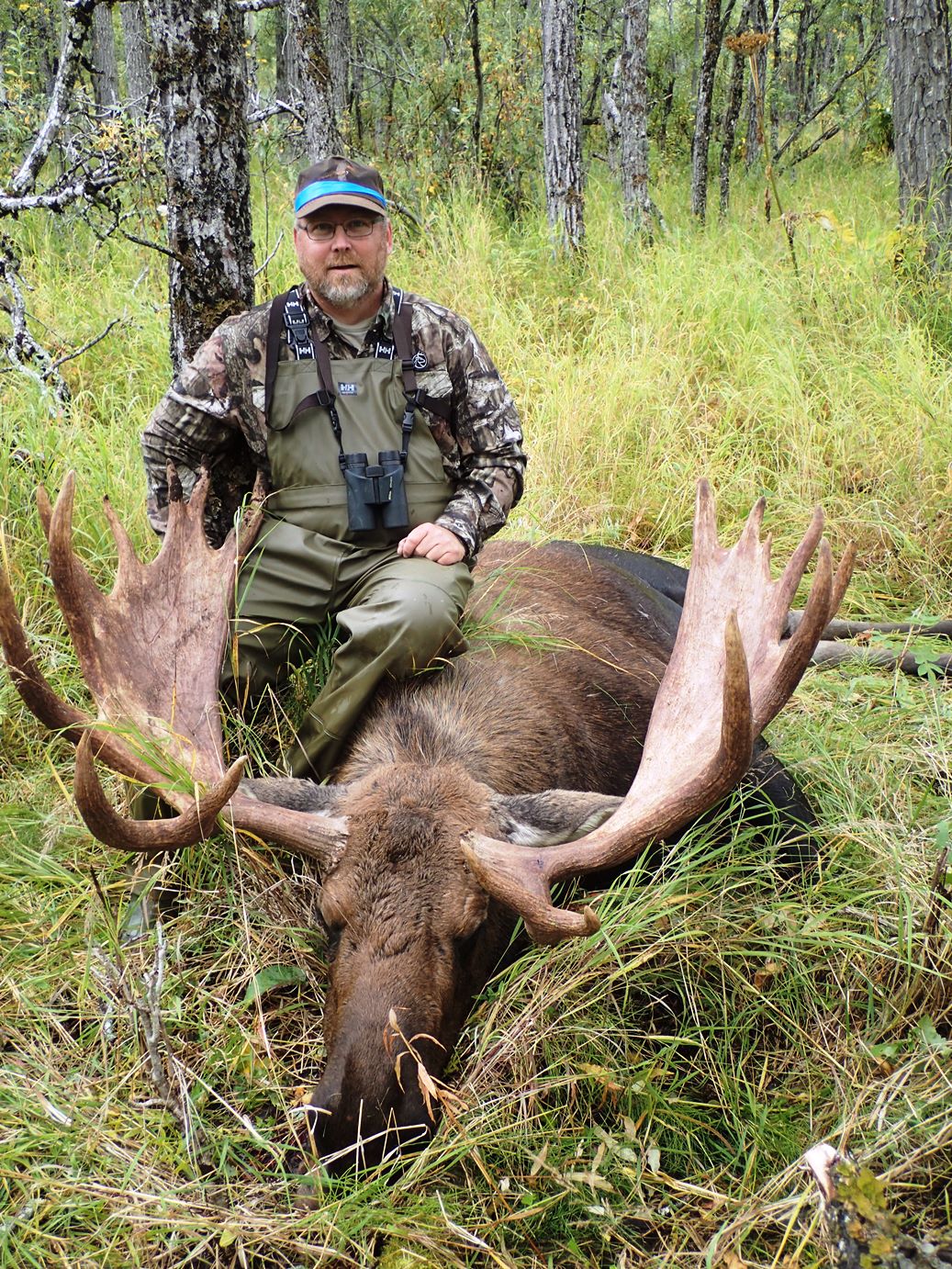 It took us until midnight to get him back to camp, even though he fell 237 yds from the tent. People can tell you how big a moose is and how hard it is to butcher and haul, but until you have done it, you really can't imagine. Nothing in my 50 yrs of dreaming prepared me for this, but I did have a handful of very sharp knives and my back proved yet strong enough. 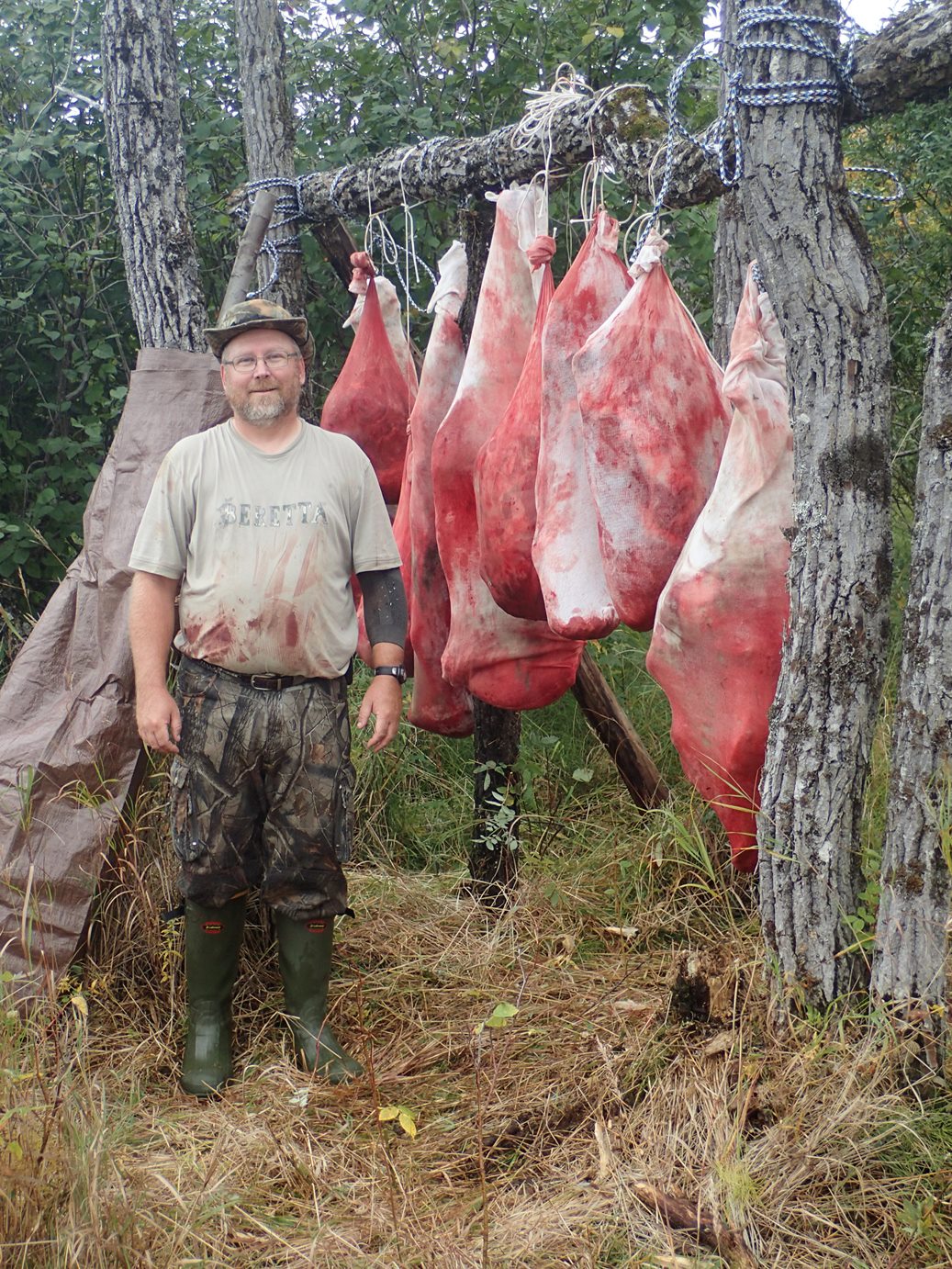 Two days later, we called in the "Army" and had this moose transported 150 miles back to Bethel. 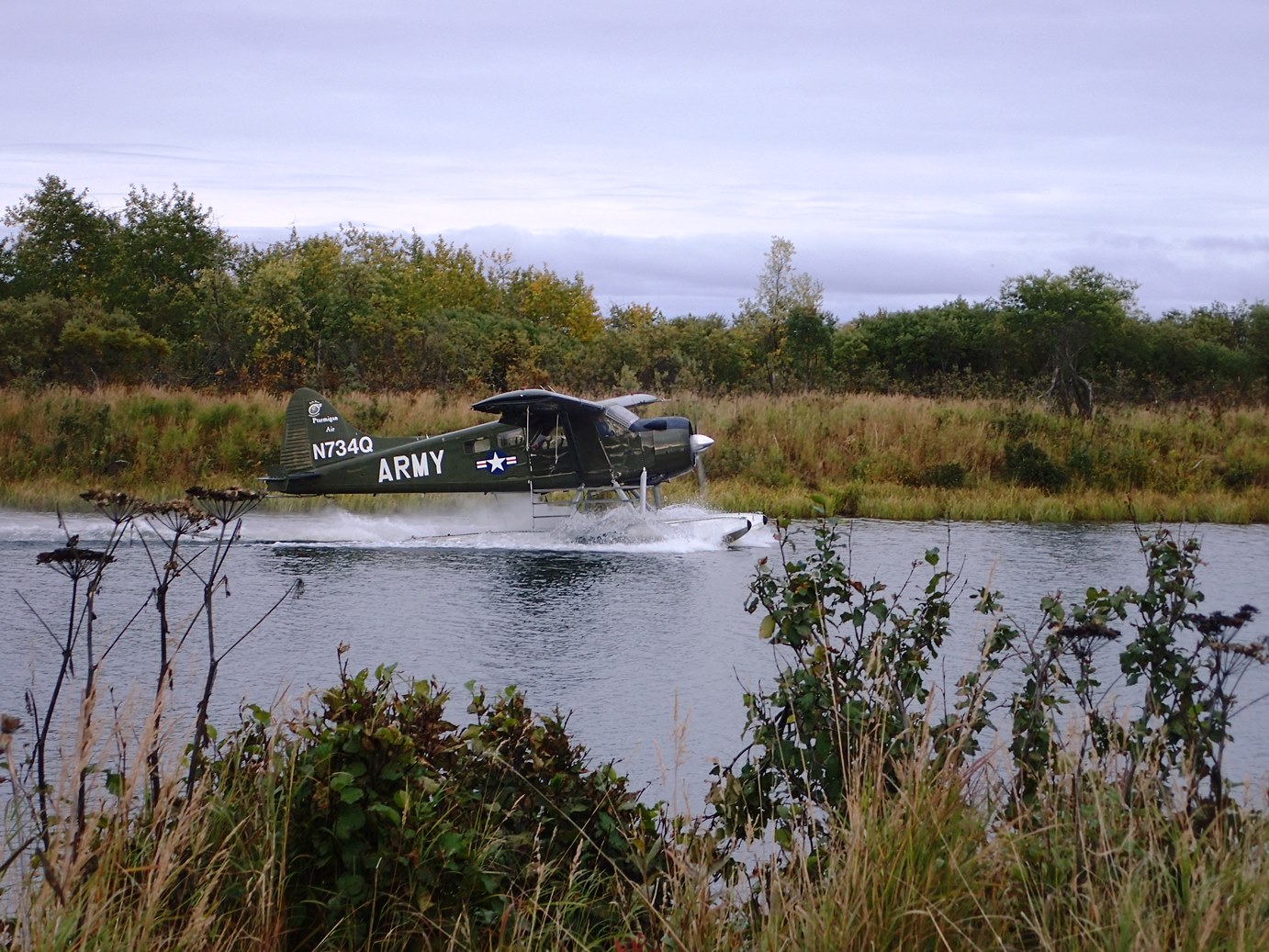 Finding my moose took a bit longer, but we needed that time to recover from the first one. Finally, we were using a small inflatable boat to move up the oxbow lake we were camped on and I spotted an unusual object in the marsh 1/3 of a mile ahead. It was a moose antler of a bedded bull, and, as I had been at that spot the day before, I knew we had a good chance to stalk close on him, if he would just stay still. He did and we did. We moved through alders, willows, across a sphagnum bog and through some aspens to come within 80 yds. He was standing up when we got there, and facing almost directly away, but luckily for me, he turned broadside and I was able to make a good shot that landed with a tremendous THUD. Not like the sound of any other bullets hitting animals that I've heard before. Very strange. He didn't even flinch, but took a few steps. I was surprised he didn't collapse immediately but I tend to always be surprised like that. I had another round in the chamber in a second and fired another to the exact same effect. And then a third and he still wouldn't go down. Mark told me latter he was pretty wobbly after this first three shots, but I was busy reloading and worrying, so I had a 4th bullet on the way in no time and this time, I went for the front shoulder because he was starting for the water. Even couple more steps would put him in deep mud and we would be in a heap of trouble. He didn't fall immediately but before I could reload yet again, he tipped over and landed flat on his side with his right horn holding his head up in the air. I put one more in his neck to be sure he was dead, but it turned out to be completely unnecessary. Still, ammo is cheap, broken legs are not. 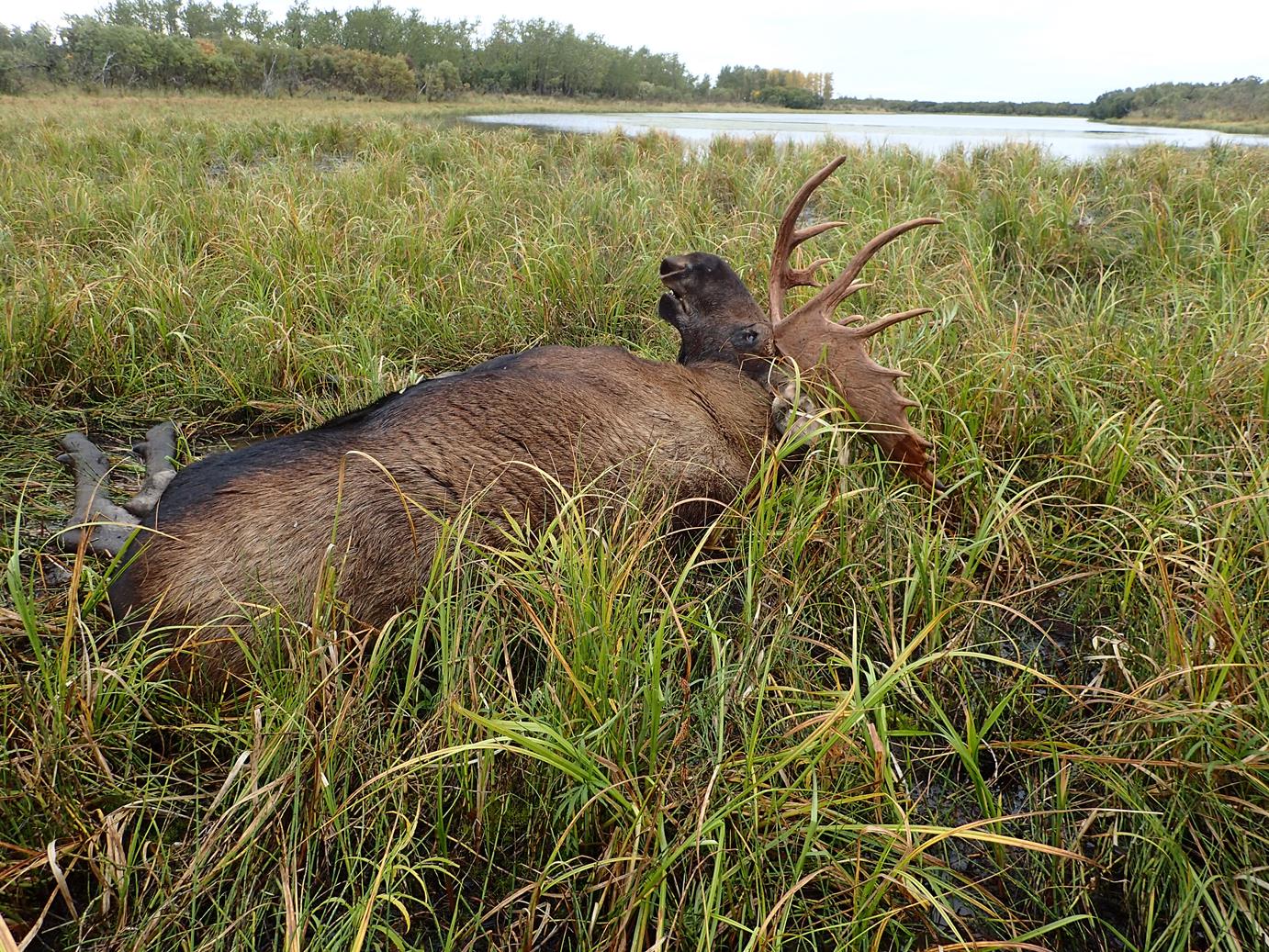 I had planned on using a Marlin 1895 made in 1899 on this trip but it didn't work out, so the trusty Ballard took on the responsibility and proved yet again, that she can do what is needed when called upon. This really is nearly the ideal singleshot BPCR hunting rifle. It's wiping rod is extremely convenient and everything else is streamlined to get the job done every time. 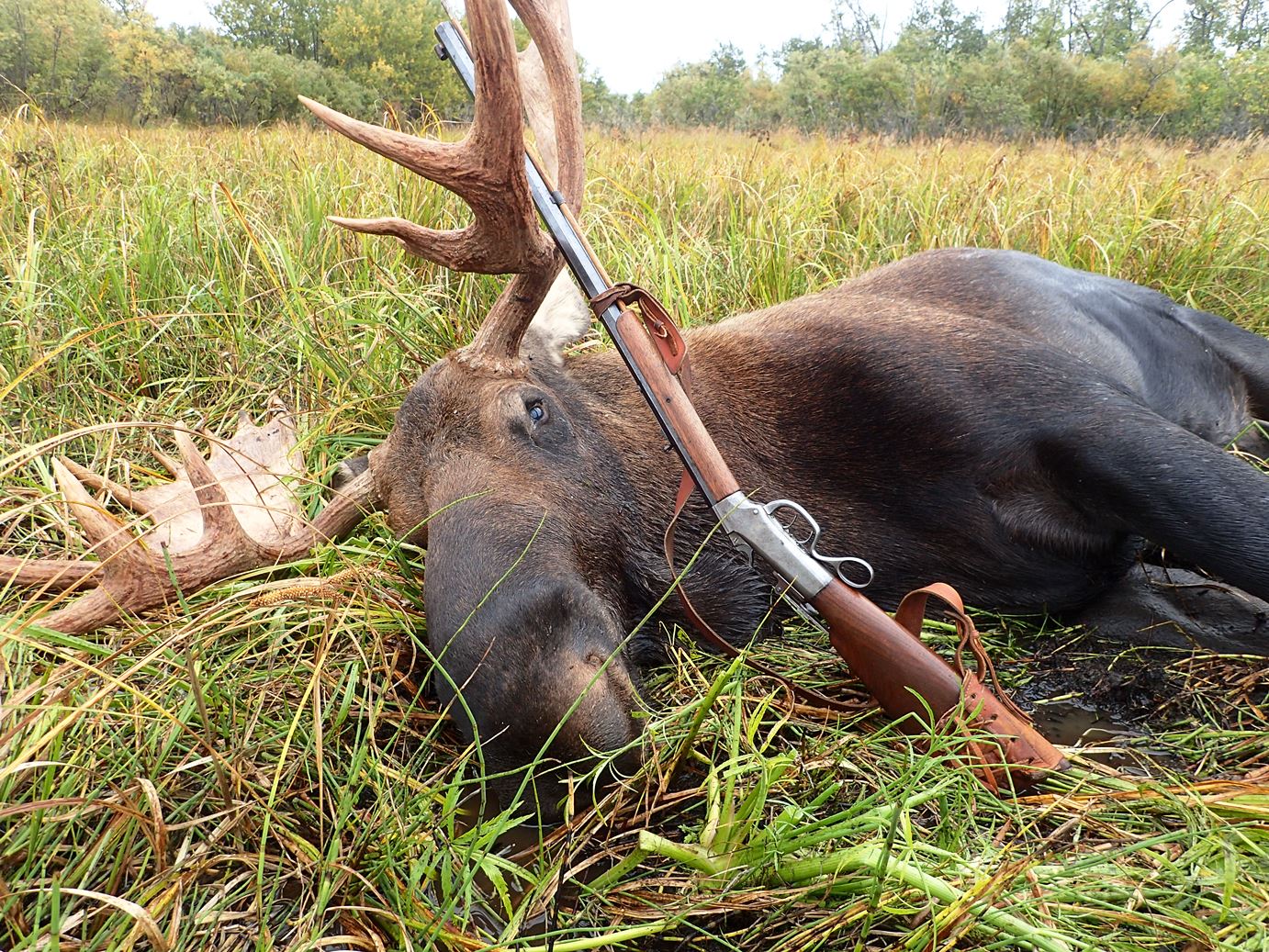 It took another 8 hrs to get this guy back in camp and up on the pole, but we got it done. 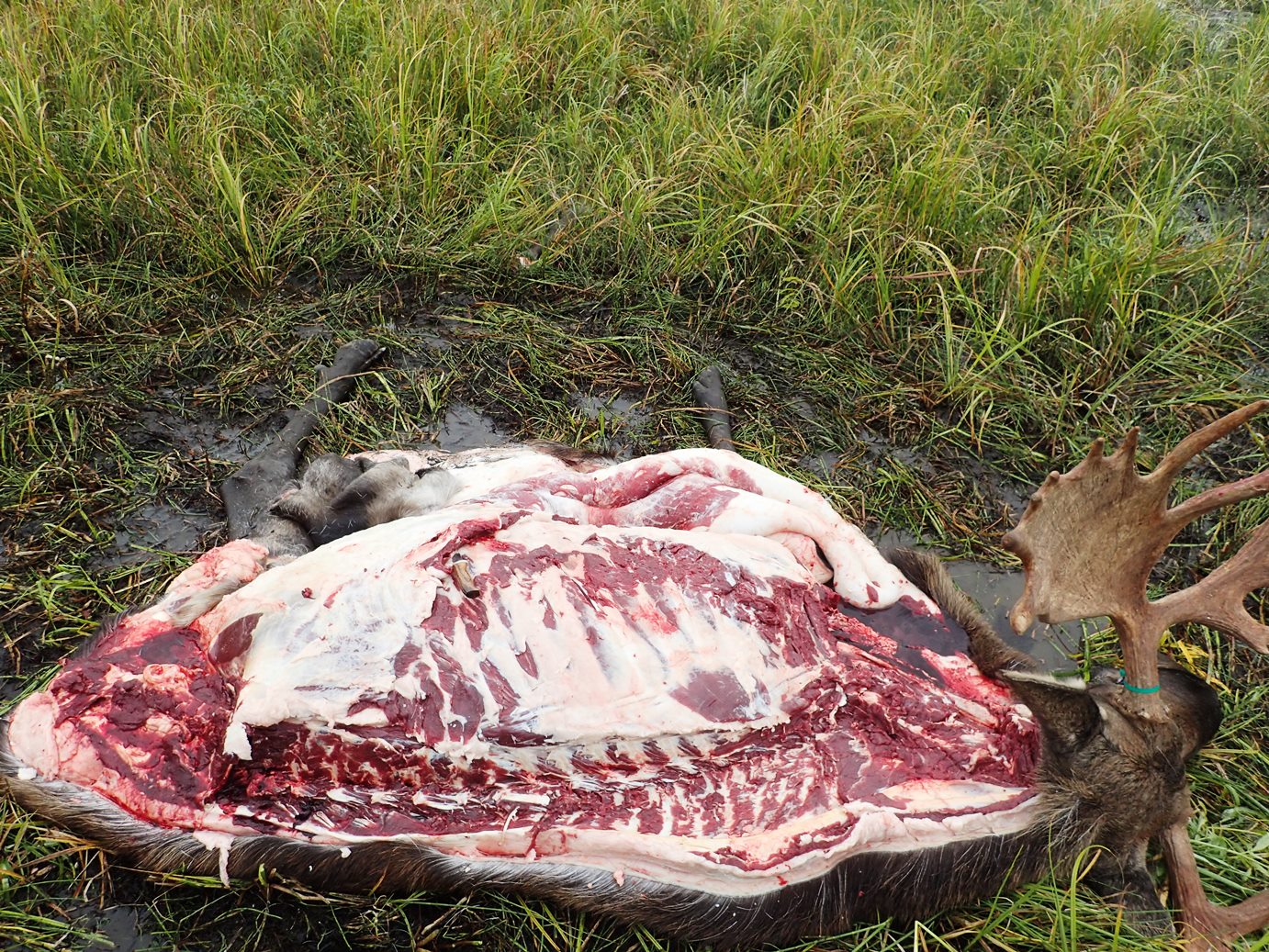 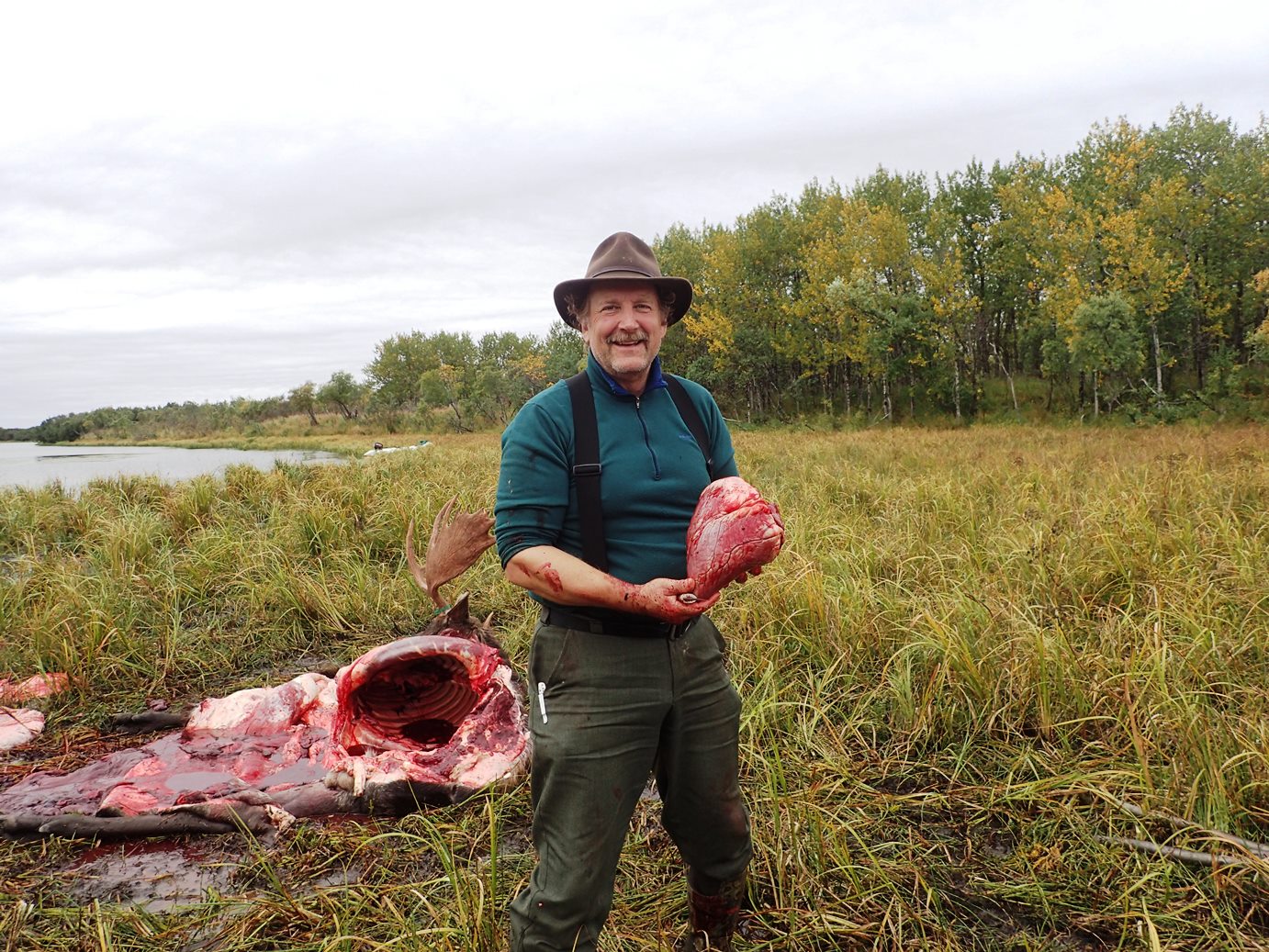 A day later the "Army" arrived again to haul him out, but not before we had stocked up on a supply of steaks 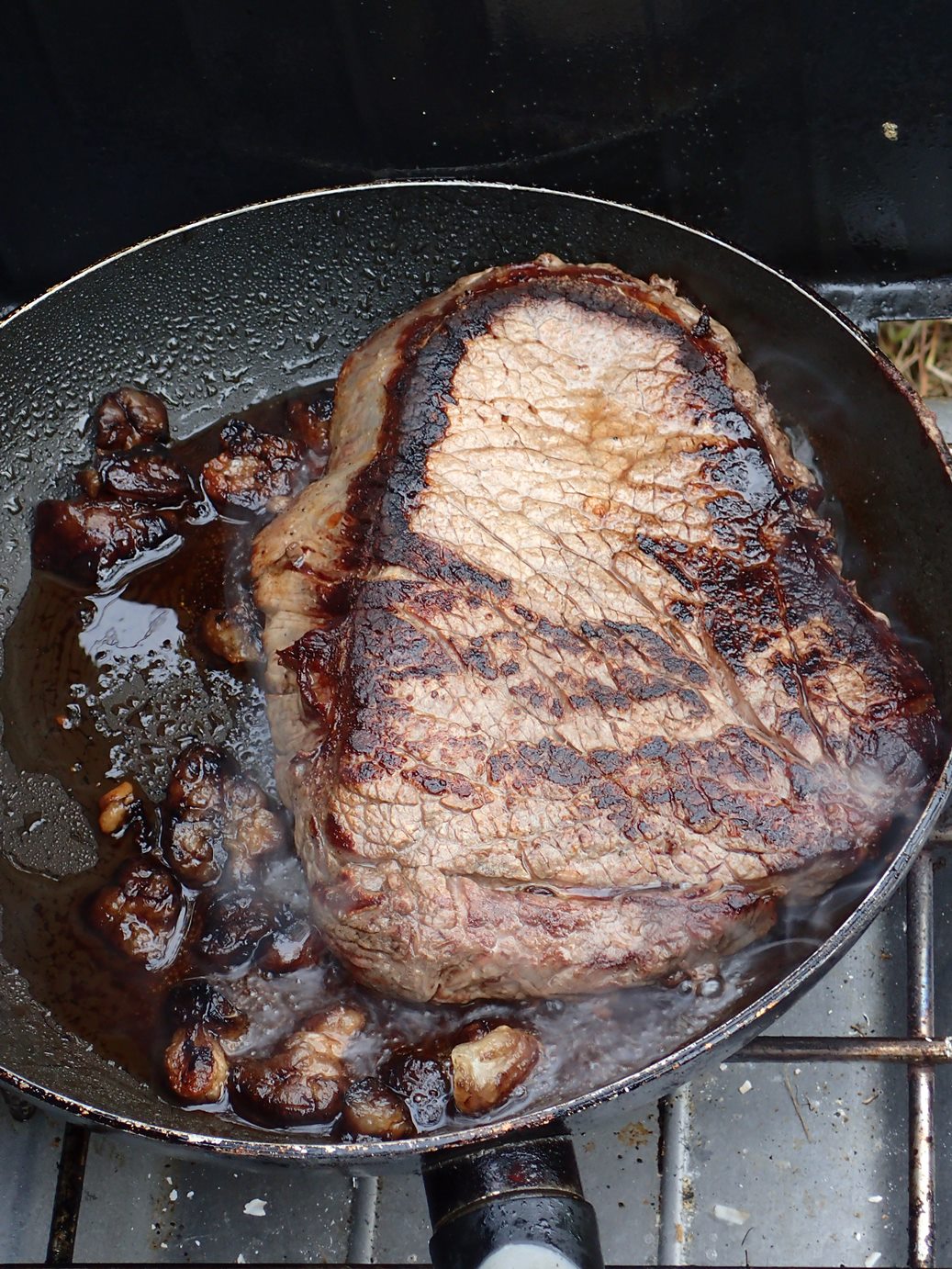 I had hoped to use a paper patched bullet in the Marlin 95, but when that didn't work out, I tried it in the Ballard. That bullet didn't work in the Ballard very well so I went with another bullet I had designed just for that rifle - a 483 gr bullet (40:1) with a smaller meplat than I usually use. It is a bore diameter paper patched bullet and it worked well. The rifle was set up with a 100 yds zero for the barrel sights and a 200 yds zero for the tang sight. In this case, the tang sight did no get used.

Of the first three shots, two landed and traveled only 1.5" apart. They cruised across the front end of the heart and completely severed the aortic arch and pulmonary veins and arteries. One of those bullets exited completely and the other was under the skin on the left side. The other of the first three bullets was just above the heart, but angled back further hitting two lungs, liver, and paunch before stopping under the skin behind the last rib. The fourth bullet, directed at the shoulder hit the humorous. I did not dissect this shoulder but it appeared that the bullet glanced off the humorous, perhaps without breaking it and then traveled through both lungs and stopping under the skin on the left side near the two that cut through the pulmonary plumbing. All four of those shots were fatal, but the two that cut the plumbing were the "most fatal", and when I opened him up 5 gallons of blood (no exaggeration) gushed out. The fifth shot at the neck centered the spine and stopped just behind his skull. 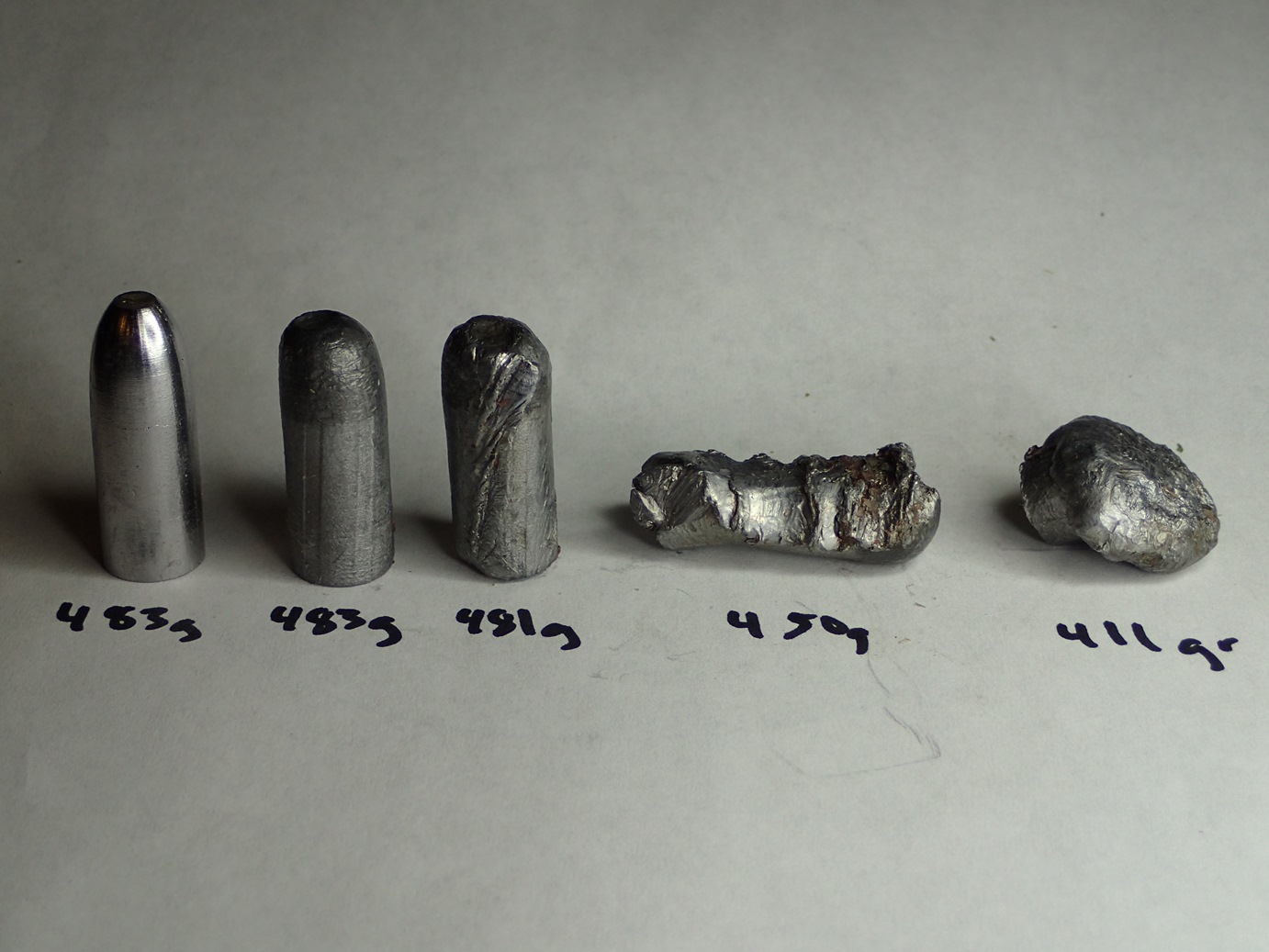 The load was 68 gr of Swiss 1.5f, some wax paper and parchment, then 0.12" of my own lube (50:50 sheep tallow and beeswax with a splash of jojoba or sperm oil), then a 0.06 fiber or LDPE wad and the bullet. Cartridges were lightly tapered crimped to hold together. I carried 10 of these in my shirt pocket for days in the rain with no problem. I am not really very happy with the expansion of these bullets, and had the expanded better, I'm not sure they would have penetrated as far as they did. Moose hide, however, is a whole lot thicker and tougher than I ever imagined - nothing like African antelope of comparable size (e.g., eland). And the fur was super thick and soaking wet which probably didn't help either. 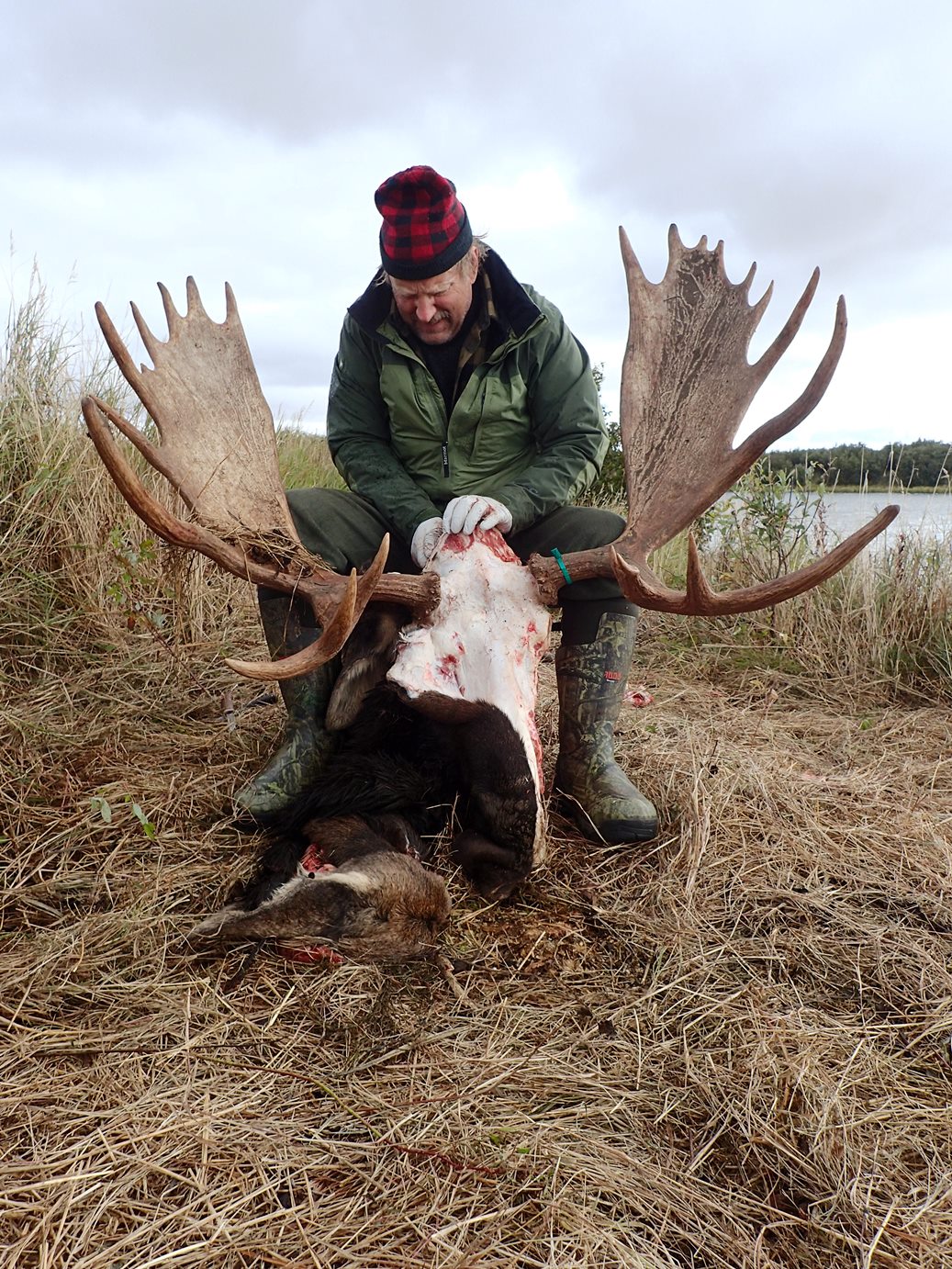 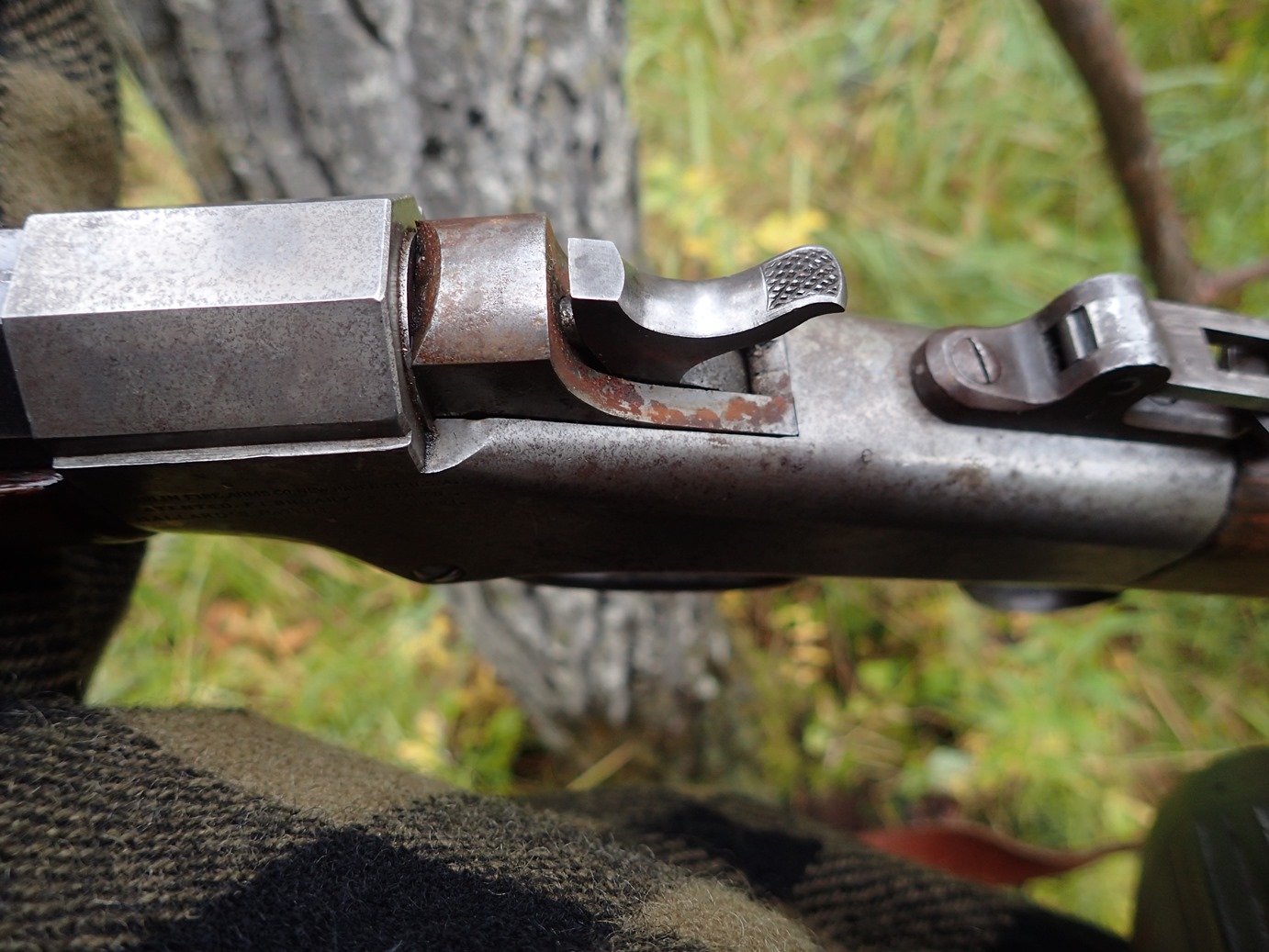 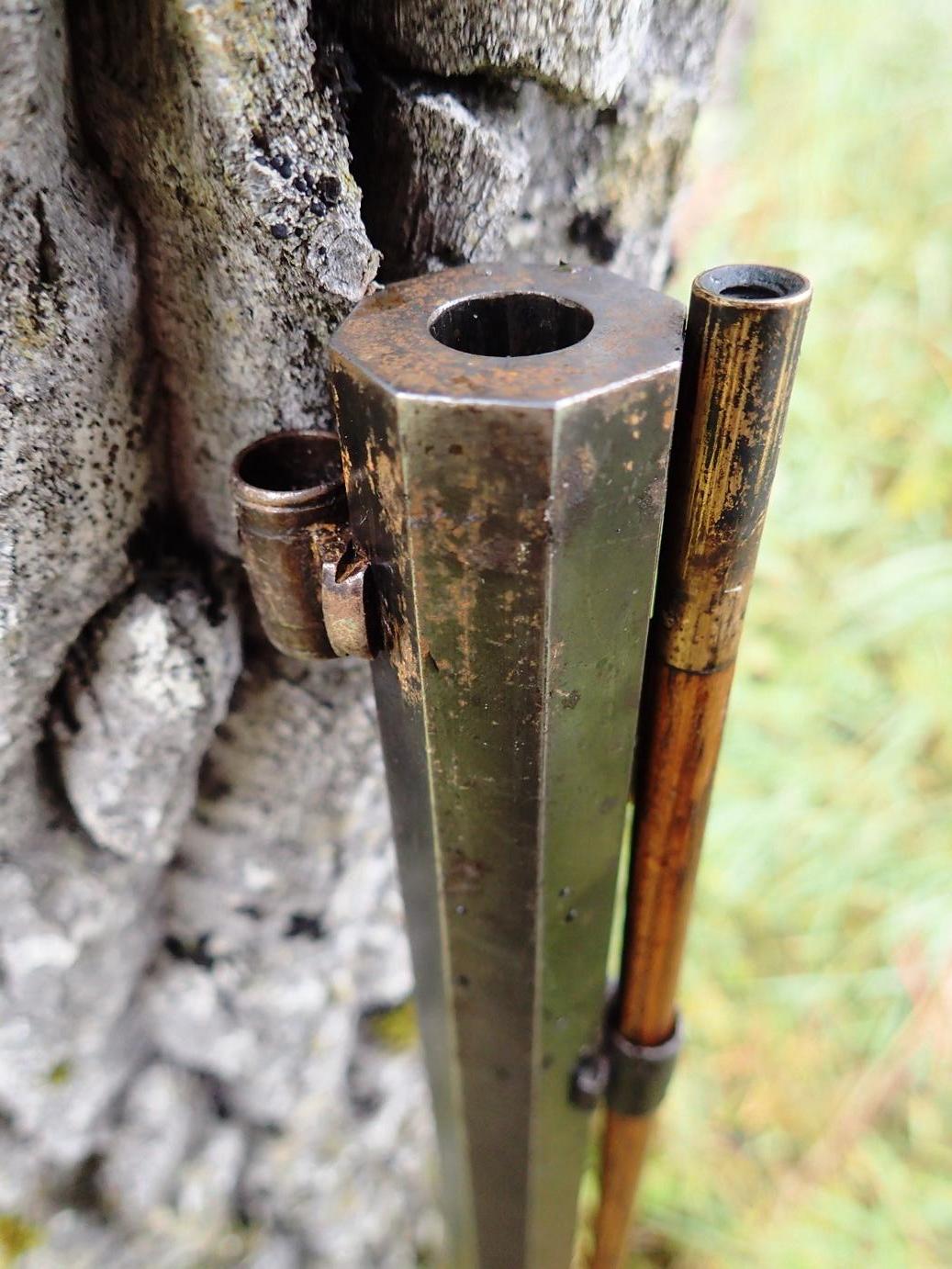 Brent
Last edited by 4 on Brent, edited 0 times in total.
I'm not from here, I just live here.
Top

Thanks for taking us along on the trip Brent. With the pictures and your description it felt like I was there with you.

Brownie
I don't live in the middle of nowhere but I can see the edge of it from here.
Top

Wow, Great Hunt! Great Photos!...Maybe I missed it, but, what is the caliber of that Pacific Ballard?
Terry
Top

It is a .45-70. Still probably the best cartridge ever invented.
I'm not from here, I just live here.
Top

Awesome report Brent!
Congratulations to you and your friend!
Sounds like a lot of work and a lot of fun !

Great report, and pictures! The Pacific was probably one of the most successful hunting rifles of the old West, and caused significant worry at both Winchester and Sharps when it hit the market! Hard to beat the .45-70 for performance and longevity!
Top

Thanks for the great write up. Something to look forward to. That one is still on my list too.

Great write up and photos! Would love to see more photos of the hunt. I may need to get my Pacific tuned up for a Deer hunt later.

What a tough great hunt!!

Kurt
"Complaining about a problem without posing a solution is called whining."
Teddy Roosevelt.
Top

Actually, Mark had a bear tag, but we never saw any bear sign at all. It is mostly black bear country anyway, but we saw only one from the air, far from camp.
I'm not from here, I just live here.
Top

Wonderful story. Glad to see people living out their dreams.
I also got to fulfill a dream of actually participating in BPCR silhouette matches this year.
I only got to attend 5 matches, but it was fun and rewarding, more on that in a later post.
I've made a lot of shooting and reloading mistakes this year, but I'm continually correcting them I hope. I did manage to get a pig pin though.

Hey, the week isn't over yet. What about Tappan Hill this weekend? I drove 300 miles last night so I can play this weekend.
I'm not from here, I just live here.
Top

Brent wroteCOLONHey, the week isn't over yet. What about Tappan Hill this weekend? I drove 300 miles last night so I can play this weekend.

Oh, it was on my list to attend but my wife wanted some quality time on her birthday so we will be camping at the lake.
Top

Well, that's not a bad alternative. Have fun.
I'm not from here, I just live here.
Top
BUTTON_POST_REPLY
20 posts